4:30am Tuesday morning, my alarm clock started blaring. Jeff and I had made plan to day-trip Hyalite canyon for ice climbing. Hyalite is near Bozeman, 3 hours away, so a long drive plus a full day of climbing, meant leaving Missoula around 5:30am. Lots of coffee got us ready for the day. Ben told us of a climb we should try, so we headed straight for it. When we reached the base, another party was already there. They were extremely nice, so we just coordinated our climbs. 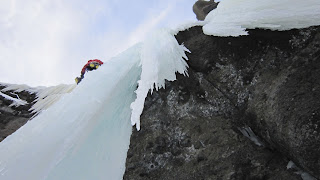 Me climbing Airborne Ranger
There were two climbs to try; Cleopatra’s Needle (WI4+/5) and Airborne Ranger (WI6). All of us were there to climb both, but the other party started on Cleo’s first. This meant straight to the business for us. A short pitch lead us to a cave to belay in. Then we looked up at the pillar. It was steep and chandeliery. We were both very intimidated, but there was a weakness up it. We took turns himming and hawwing about it and before I new it, I was climbing. A look became an attempt. 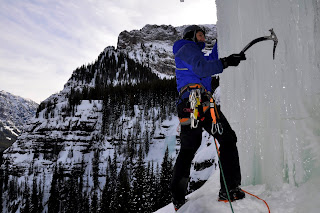 Jeff steeping out for a look
Temps were about 10 degrees so the ice was brittle. The beginning was delicate, but the ice got better the higher I got. Eventually the tool placements got good as did the screws. Unfortunately at this point I was getting very pumped. Smart climbing allowed me to reach the top without blowing it. Jeff came up, took the lead, and got us to the top.
We rapped off, but still had some daylight. With the remaining time, we climbed Cleo’s. That maxed out our daylight. We got down and packed up just as darkness reached us. An enjoyable dark walk got us back to the car and the beginning of our journey home. 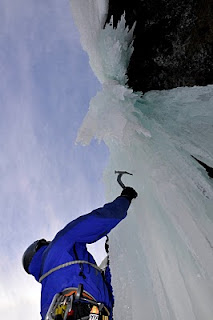