short term loans washington state
The Cu’s were popping early Tuesday so with hopes of flying, a few of us made plans to meet around 4:30. Surprisingly the day had not over developed so we headed up the hill. Everything was going normal until we came across the first of two down trees. The previous weekend’s wind storm had left two trees over the road. If we couldn’t move them, we would be done.
The first one was easy. It was rotten and broke easily. The second was another story. It was solid and not going to budge. With only a hatchet I happened to have, we took turn for an hour chopping at the tree. When it was finally cut, we had to resort to leverage moves like egyptian slaves moving monstrous stones. Eventually the tree gave way and the road was clear.
We were now an hour late and assumed the prime window for flying had passed us by. Still flying down always beats driving down. We quickly set up and formed a launch line. Watching everyone start to fly didn’t look promising, but when I launched and looked behind me, I could see everyone soaring. The day hadn’t shut down yet! It actually turned out to be quite good. The four of us spent an hour or so soaring around the mountains surrounding Missoula for a wonderful evening. 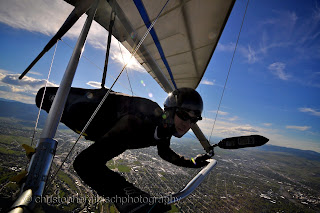 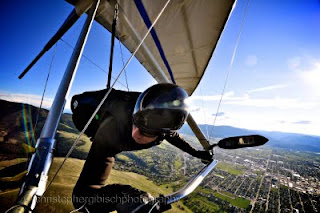 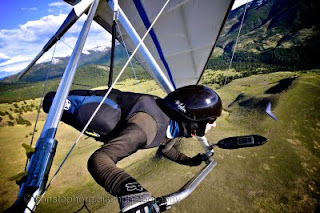