Tuesday, Jeff and I headed back to the Mission Mountains for another day of cragging. With recent warm temps, we figured the road would be in better shape, but weren’t sure what condition the ice was in. Monday had rained hard, but we thought there was enough ice to withstand it. The road and trail turned out to be in great shape, but the sight of the ice was disappointing. Much of what was there the previous Friday had either melted away or fell down.
A closer look revealed that everything that was still standing was running with water. Our motivation faded away even further. We were there to climb though, and had hiked the 2 miles in. We could deal with getting wet and cold for at least one climb. 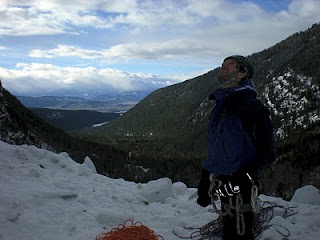 Shapiro checking out the line
I harnessed some screws and started up. A dry line appeared on the far left side of the ice, but it was difficult to assess from the ground. As I climbed, everything looked dry. At least where I was. On either side of me was running water. I worked my way up the ice getting wet only for a moment. The route was fun, but seemed to be the only dry line in the area. We rapped off and called it quits.
Cooler temps have reached Missoula now, so hopefully the ice will start to fill in again. 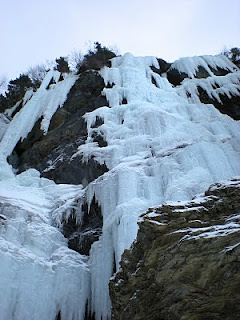 The route (just left of center)