Punked in the Park

As usual this Winter, Justin and I had plans to climb and the weather wasn’t cooperating. Our objectives were in East Glacier where the weather can be horrendous. As we approached the park, we could see that the entire place was engulfed in a storm. The wind was blowing and the temps were bitter. On the verge of bailing, we threw our stuff together and began the approach.
This is the point where Justin and I always get pissed off. We now had to ski 7 miles of road to reach the Many Glacier hotel. 4 of which were outside of the park. How the hell is that an accessible public National Park. I don’t buy a park pass every year for 4 months of access. I know most people don’t care for the park in Winter , but I would like to continue to have access to one of this nation’s most beautiful places. I guess I’m just a minority. Enough ranting now. 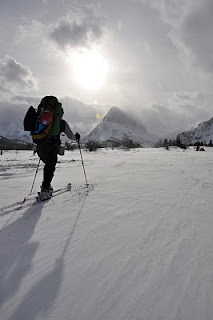 The approach into the park
The approach wasn’t too bad, but our packs kind of broke us down. The hotel deck offered a nice dry place to camp so we stopped there. We set up camp and settled in for the night. 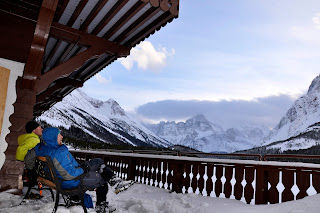 Lounging on the deck
In the morning we woke to whiteout conditions completely shutting down our climbing plans. After a slow start we decided to go on a tour and take a look at things. Weather remained poor, but it was still nice to experience the park when no one was around. On our way back to camp, we ditched some gear with plans of climbing the next day before we left. 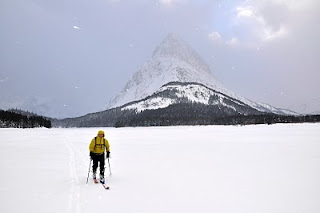 Back to camp on day 2 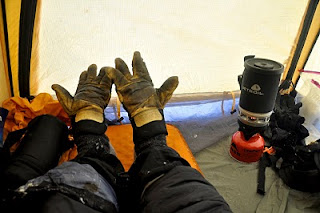 Doing what is necessary to keep the toes warm
When we got up the next morning, the sky was clear, but the temps were bitterly cold. Once again, no climbing. The decision was made to quickly get our gear and then head for the car. After using the stove to thaw our boots out, we on our way to gather our gear. Despite the cold temps, the park was stunning. It is always nice to hang out in the park regardless of conditions. 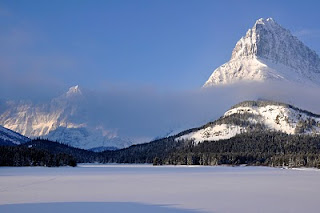 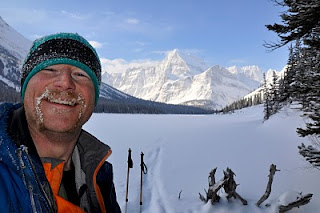 Justin at the gear cache
The ski out was uneventful. The wind and cold temps plagued us the entire way, but we knew it wouldn’t last forever. The car and cold beer weren’t too far away. 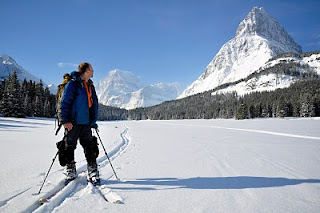 One last look before heading home

2 Comments for Punked in the Park

Chris- Bummed to hear that the trip didn’t end with some epic climbing. It still looks like an amazing experience. Awesome shots, too. I particularly love the first vertical skiing shot and the landscape shots of the peaks. I also like the ski back to camp and you warming your toes. Keep up the adventures bro! I want to do one with you some day. All the best my friend- stay knarly! -tyler g.