Ice season is taking its sweet time to make it to Missoula, but with conditions looking promising in Glacier National Park, Ben and I decided to check it out.  We left Missoula at 5am Tuesday hoping to squeeze a climb out of the day.  We made great time and were leaving the parking lot by 8.  Approach conditions were amazing; almost zero snow all the way to the lake.  At the back of the lake we found a boot track, most likely from climbers over the weekend.  They were headed towards the route Memorandum, so we decided to take advantage of the easy travel and climb that particular route. 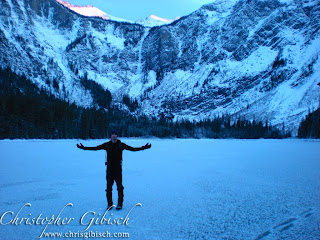 Ben on Avalanche Lake
By around 11:30 I was racked up and leading up.  The ice was thick and gooey.  For the sake of time we stretched out each pitch and topped out on the climb after 3 pitches.  It had been a long time since I had climbed the route and had almost forgotten how awesome it is.  After 3 quick rappels we were back at the packs and beginning the walk out.  Everything went smoothly and before long we were on our way to meet Woody and Lexi in Whitefish for dinner. 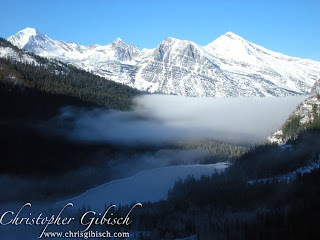 Looking back at the lake
The next morning Justin joined us and the three of us headed back to Avalanche lake to climb the Inner Thigh.  Like the day before, the approach went incredibly smooth.  We had a later start so we were a bit behind schedule, but not too concerned.  It was noon by the time we reached the base of the route and it looked great.  A hidden corner system choked with ice. 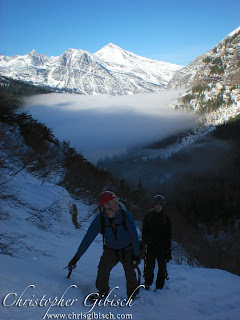 Approaching
Woods began up and made short work of the first pitch which shares the start with Monument.  Ben and I moved the belay up the snow slope, then he began his pitch.  It was an awesome groove up the corner system for about 60 meters.  When I reached his belay, he informed me we were a little off route.  From the looks of it, a few tricky moves would get us back on route. 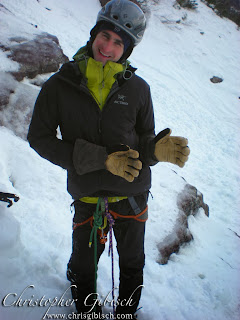 Beginning of the season packing error
I took the lead and began the traverse.  It was a few balance moves run out from the gear, but really not too bad.  As I turned the corner and began up the steepest part of the pitch, I had trouble getting my left pick to stick and realized it had broken in half!  A moment of concern rushed over me, then I realized I just had to finish the pitch.  It was easing off and the ice was good so I was still able to get the busted pick to stick…good enough I guess.  With the broken pick, I cut the pitch short and built a belay.  The guys cruised up to me and with the day coming to an end, we decided I would continue up to finish the climb.  Ben lent me his tools and I climbed the last bit to a great belay. 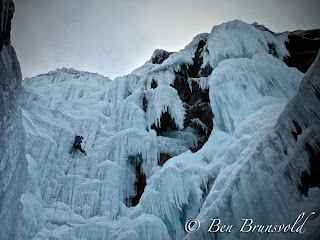 As the light was fading, we made 3 rope stretching rappels and made it back to our packs.  By this point it was finally dark so we took our time and began the hike out.  We worked our way down the classic descend through slide alder and creeks eventually ending up at the crag ice cliff band.  After some searching, we found a good tree to rap off of.  70 meters into the pitch black seemed like one of the longest rappels I’ve ever done and thankfully the ropes reached the ground!  Now it was easy going. 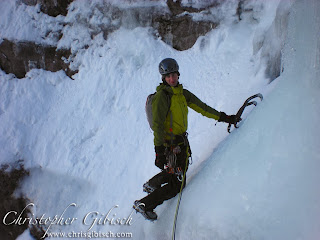 Ben starting up the Inner Thigh

We began the easy hike back to the car and when we reached the lake, shut off our lamps…. The night sky was so beautiful.  Filled with stars and not a sounds other than the ice occasionally expanding and cracking.  We made it back to Whitefish, grabbed some dinner, and hit the road for home.  In bed by 2am and up for work by 6am.  A rough day now, but all worth it. 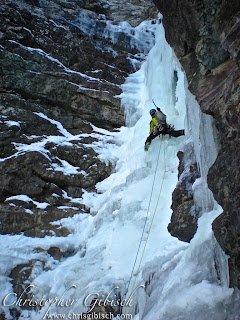 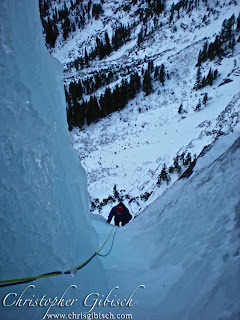 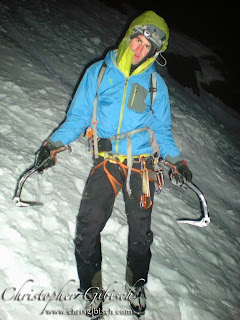